This popular Italian salad is a perfect addition to any summer meal or BBQ. Crusty bread that’s been infused with garlic butter makes this it irresistible. Next time if you’re looking for a perfect side dish try this amazing Summer Panzanella with Garlic Butter Bread. 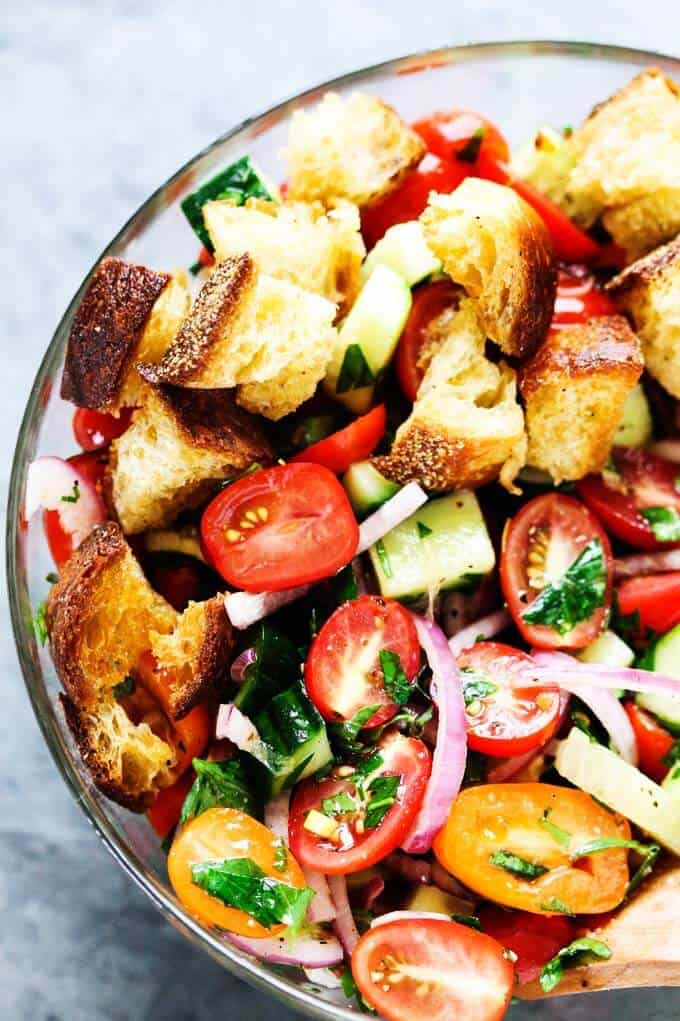 A huge part of the Mediterranean diet are salads that contain some sort of bread with lots of olive oil, of course. This Summer Panzanella with Garlic Butter Bread is no different.

I used to make my Panzanella with just cubed bread and let it soak in the juices that vegetables released with a combination of red wine vinegar and olive oil. But when I tried infusing my bread with garlic and butter first and then bake it until golden perfection, it was a game changer. 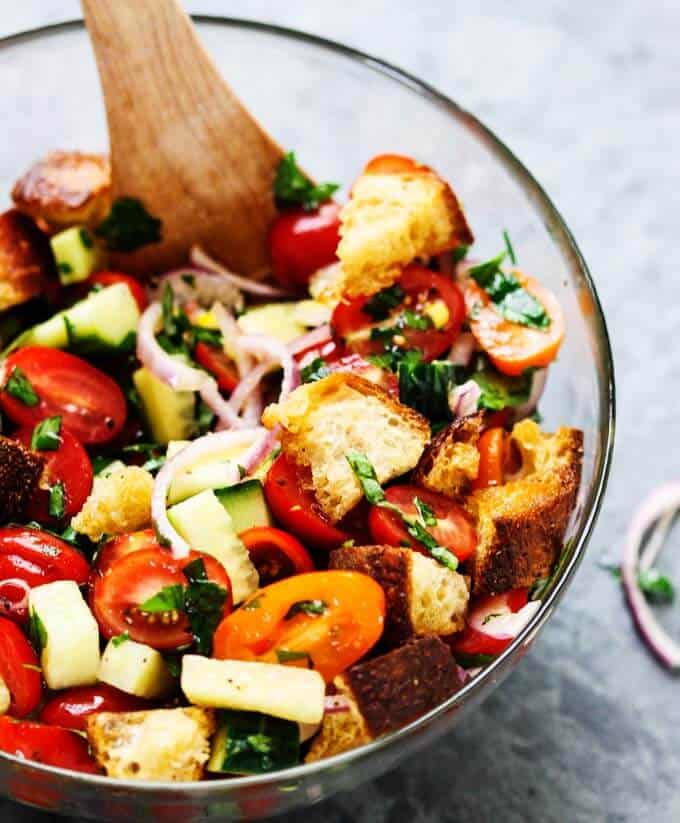 This Panzanella bread salad is so perfect for a summer BBQ. You can throw on a grill whatever you feel like, whip up this salad with garlic butter bread and you have dinner ready in 30 minutes.

What I really like about this Italian bread salad is, that it is actually almost a whole meal in itself. It’s like a vegetable sandwich in a bowl. You have your vegetables (fresh tomatoes, cucumbers, and red onions – you can’t go wrong with that), your carbs in the form of bread and your fats in terms of olive oil and butter.

Ok, ok it doesn’t have protein but if you really want to make it like a whole vegetarian meal, just add some chickpeas or mozzarella cheese. 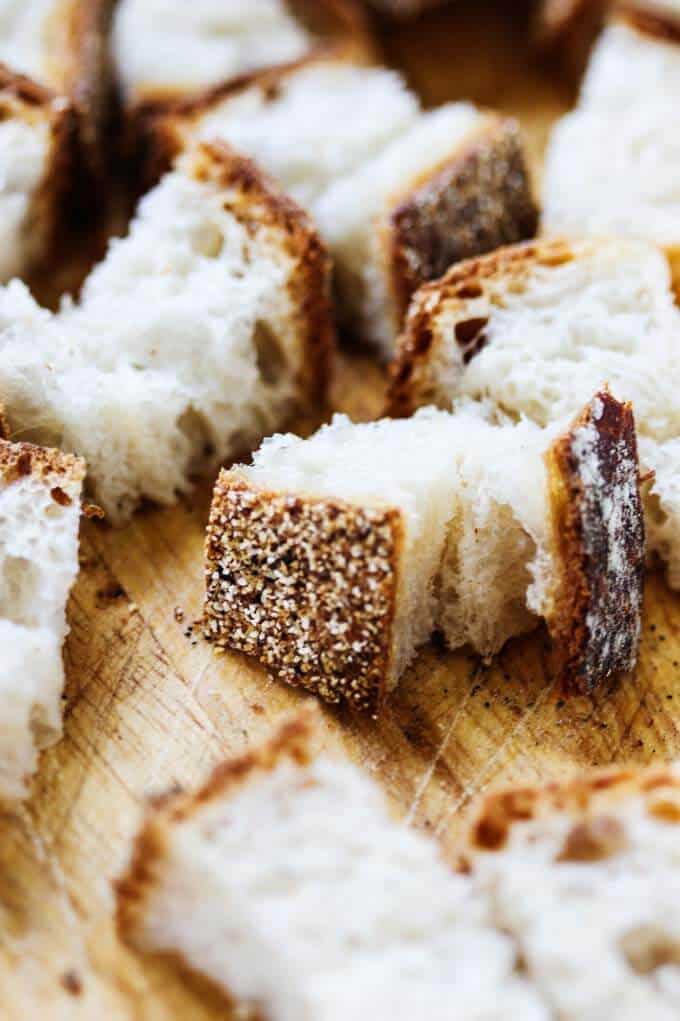 This bread tossed with garlic infused butter and then baked in the oven was to die for. Please don’t tell me that you don’t want to eat it now. I do… 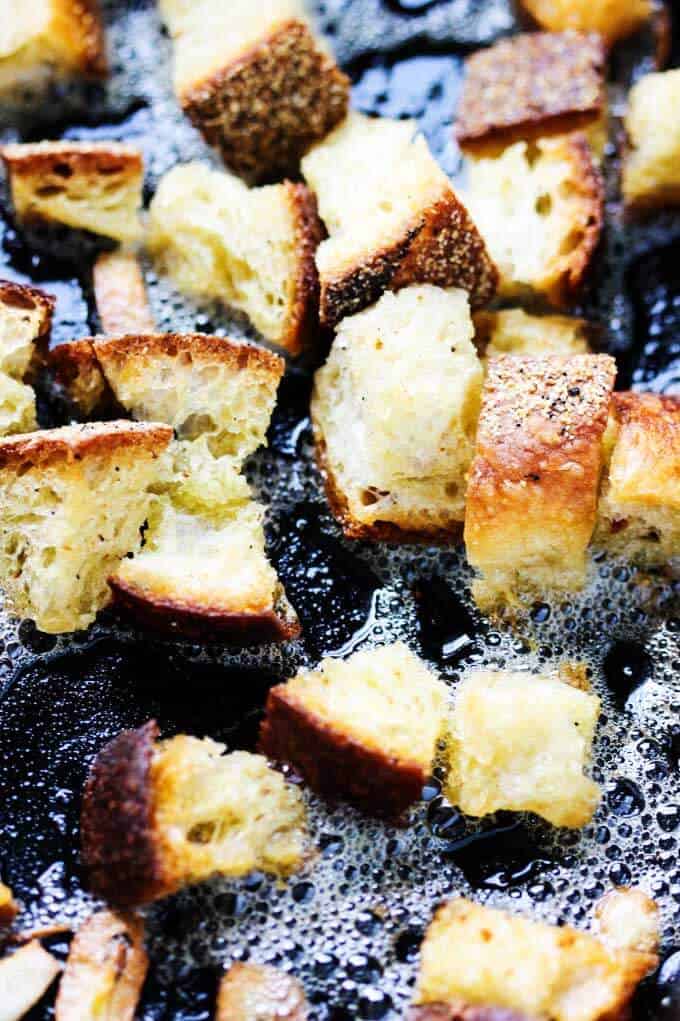 Italian Panzanella Bread Salad – A Winner at The Summer Menu

Recently I invited a couple who I met in my home town, for BBQ dinner. They are my Polish people and they are super awesome. We felt the instant connection right from the gecko. The best part is that they have a daughter that is very close to my son’s age, so we had two little blond cuties running in my backyard.

Anyways, I prepared my summer BBQ menu. I marinated some Honey Harrisa Chicken Skewers, made a garlic yogurt sauce for this, made some Polish Rice Salad with Corn, Ham, Cucumber and Chives, Polish Sausage and of course my summer Panzanella.

I was sure that Polish sausage and Polish salad will be the hit of the night. Gosh, I was mistaken. They were raving about my Panzanella. For them, it was an absolute winner that night.

I’m not sure if any more endorsement is needed. 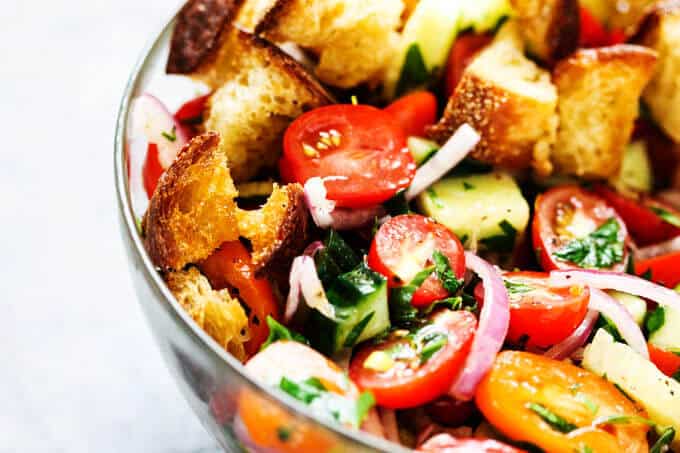 What To Serve Summer Panzanella With

I like it the most with some grilled light chicken, like these Mediterranean Chicken Kebabs or Italian sausage, but again possibilities are endless. I love fresh, fast and easy summer recipe.

Here are a couple of other suggestions:

Oh and by the way, I think that my version of Summer Panzanella with Garlic Butter Bread would not be approved by Florentine traditionalists, at least according to Wikipedia. Panzanella should contain only onions and tomatoes and in fact, until the 20th century, it was only onions. Isn’t that interesting? 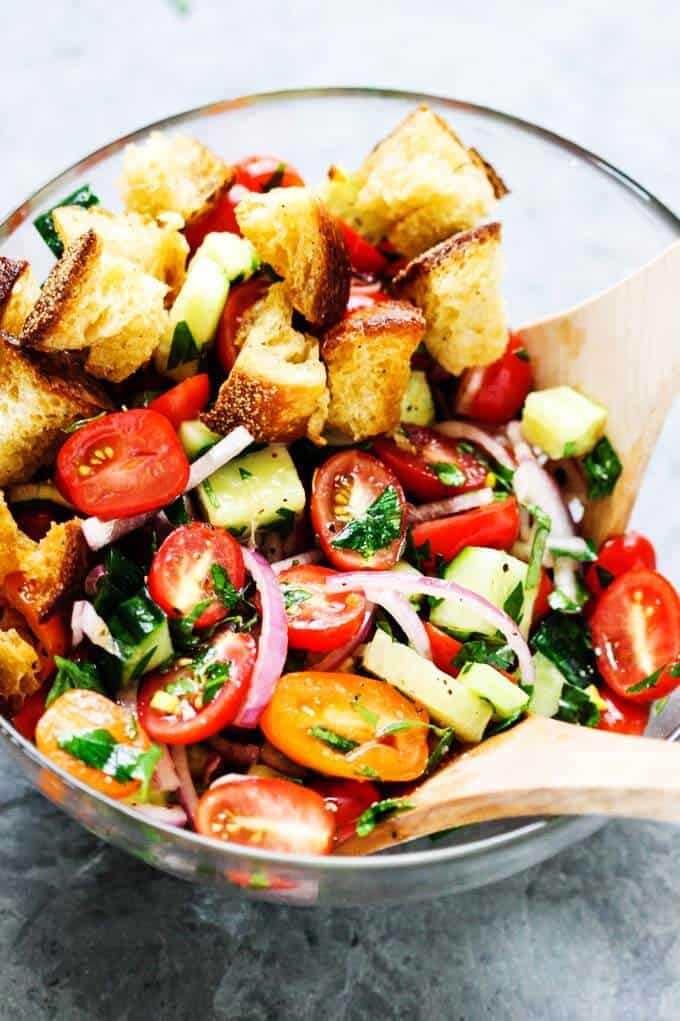 Try my Panzanella salad recipe soon and it will stay with you through the whole summer. You will want to make it over and over. I LOVE summer! Cheers my friends. 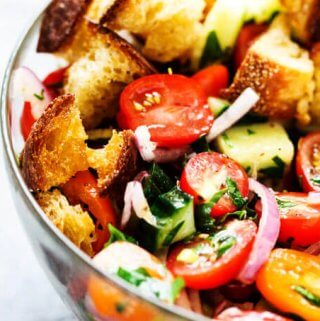 This post was originally published on June 1, 2016, and since then was updated to provide additional information.