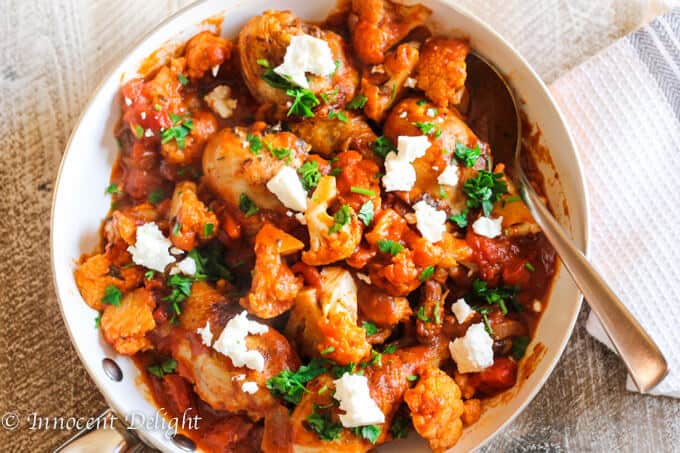 Recently I saw a similar recipe to this one in one of the newspapers. I think it might have been New York Times but I couldn’t find it later on when I was trying to recreate it. I remember that I’ve read this recipe and I absolutely loved it. It had chicken simmered in tomatoes and onions, with some cinnamon and oregano. Almost at the end the cauliflower and Kalamata olives were added. The dish was served with the sprinkles of feta cheese and parsley. Brilliant. Because I couldn’t find this recipe I decided to create it on my own and hence the Greek Chicken with Tomatoes, Cauliflower and Feta ended up on our dinner table. And it was as good as it sounds. 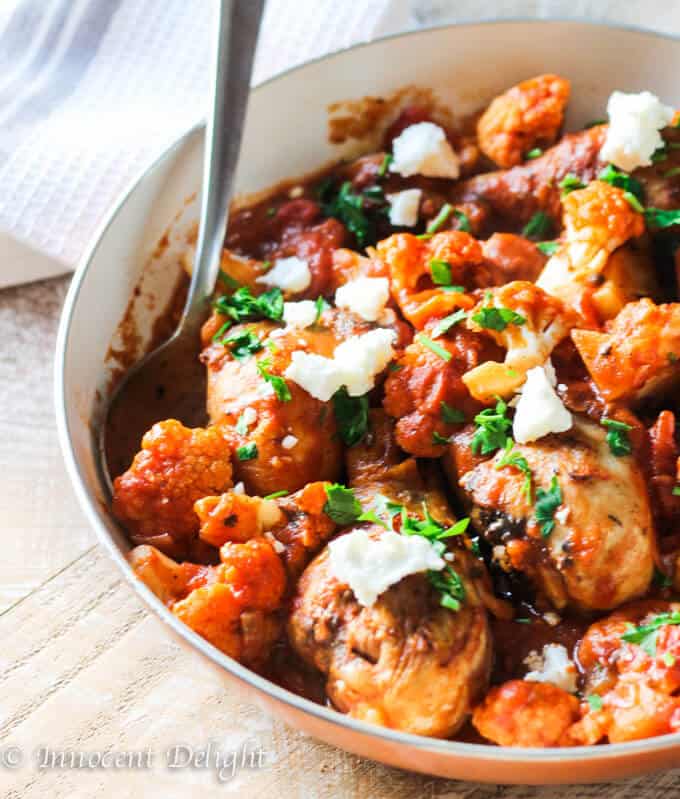 Mediterranean flavors are my ultimate favorites. Ever since I tried Pasticio, a Greek pasta with meat and tomato sauce, I was hooked. The spices made the difference though. Meat and tomato sauce screams Italian, but Greeks make it different. They add cinnamon to their tomatoes sauce and it’s out of this world. Apparently it is not just the Greek thing, cinnamon is added to dishes in Turkey and Morocco as well. If you are up for this kind of flavors check my recipes for the Turkish Inspired Eggplant  or Moroccan Spiced Beef Stew. You won’t regret it. 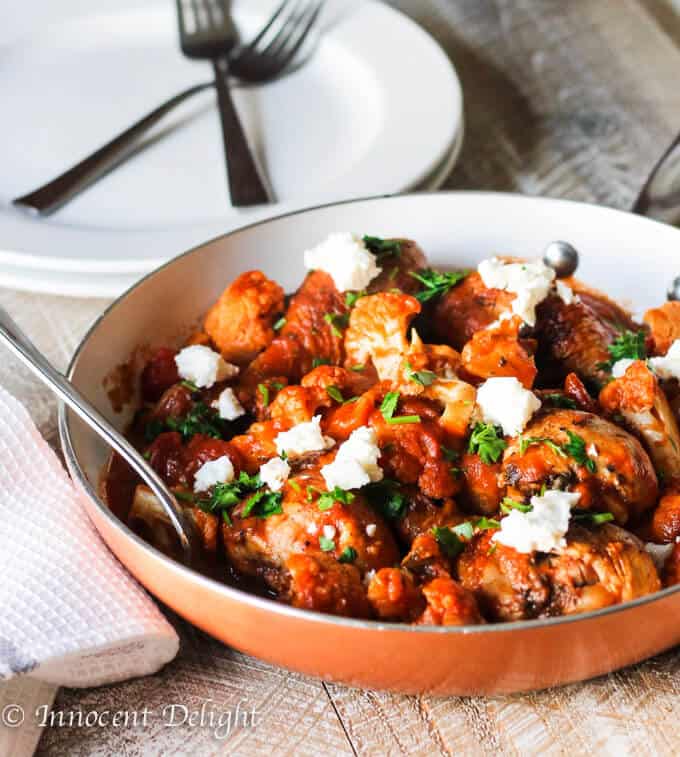 I made this Greek Chicken with Tomatoes, Cauliflower and Feta recently for dinner. To accompany this dish I made my all times favorite (at least in my house) Greek Spinach Rice and brussels sprouts with bacon and balsamic reduction. My husbands started eating the dinner and was impressed with all the flavors. But at some point he looked at me and said: “Do not think that I don’t know what is going on here…”. What he meant by this was that there were veggies ALL over. We had spinach in rice, we had brussels sprouts and we had cauliflower and tomatoes in chicken.  I could have way more veggies but my hubby is so not veggie friendly. But I’m working on it and I think I have been pretty successful. 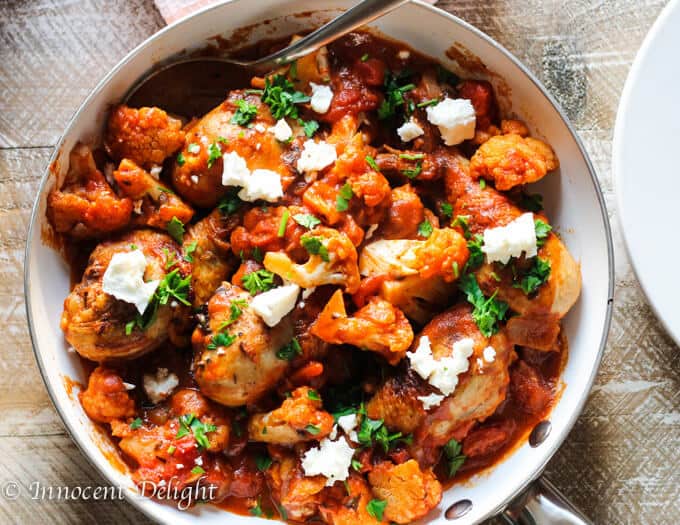 Anyways, coming back to the dish that I found in the newspaper, it had olives in it. Feta and Olives. It cannot get any more Greek than this. Unfortunately my husband despise olives. He cannot even be close to them. So my version does not include olives but if you’re up for it, add some Kalamata Olives and enjoy this amazing Greek Chicken with Tomatoes, Cauliflower and Feta. 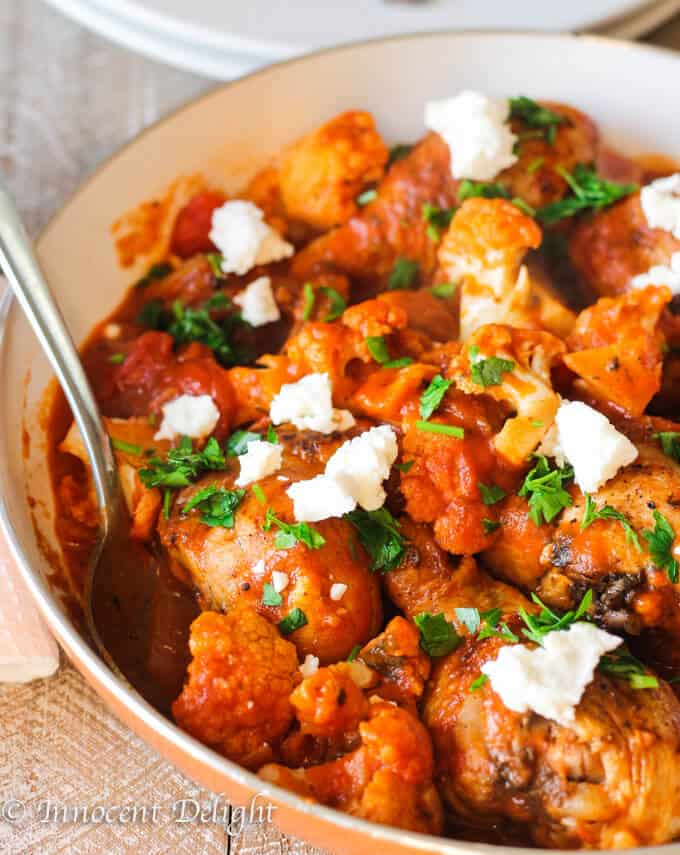 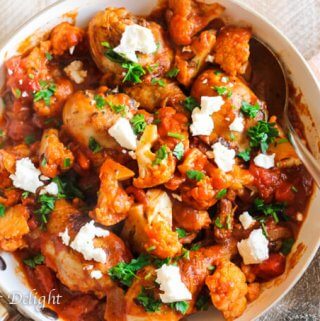 If you want to use olives, add them at the same time the cauliflower is added to the pan.
Tried this recipe?Show me @eatingeuropean or tag #eatingeuropean!