Rotkohl is a classic German side dish for braised red cabbage. It may be served with or without bacon and it has a very distinct sweet and sour cabbage flavor. It’s braised in apple cider with a touch of sugar (sometimes with the addition of cherry preserve) and spices then finished off with an apple cider vinegar. If you’ve traveled to Germany and had a chance to try it, I’m certain the authenticity of this recipe will transport you right back there. For those of you who’ve never tried it, give it a go and I’m certain your stomach will demand an immediate trip to Germany. 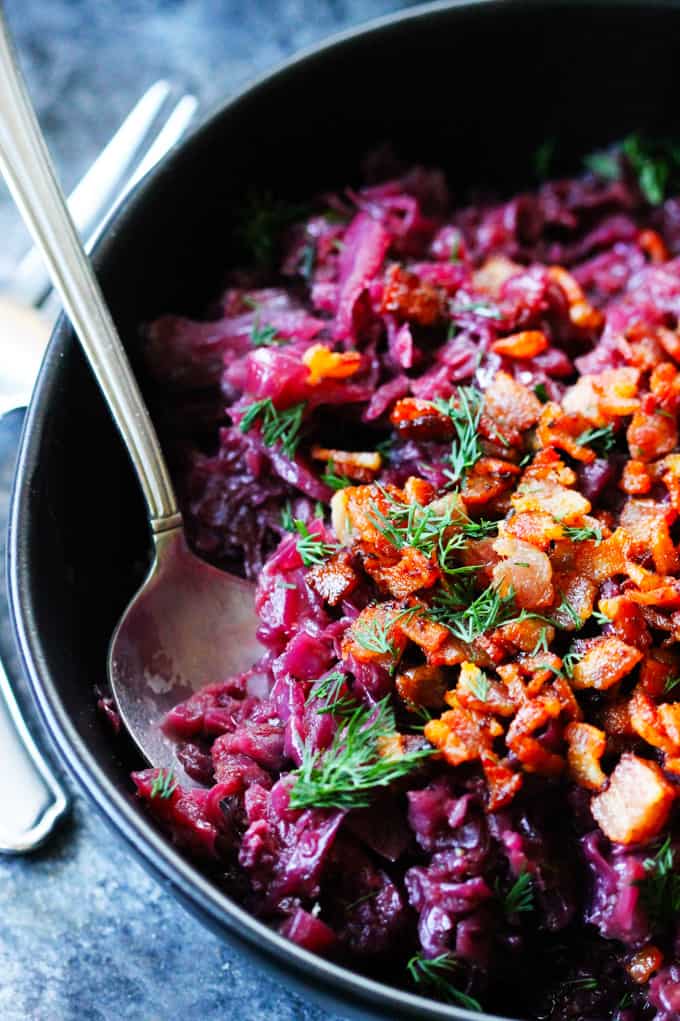 Rotkohl is a German Braised Red Cabbage that has a distinctive sweet and sour taste.  It is one of the most popular German side dishes, often served with meats and potatoes. Some cooks add bacon and some would don’t. Often, if the bacon is added it’s at the beginning of the cooking process so that the cabbage is braised with the bacon.

Personally, I prefer crunchy bacon and that’s why I fried it up at the end and then added it on top of my cabbage. Some would argue that traditional Rotkohl would not have any bacon at all, so use your own discretion here.

In my house, in order to serve a braised cabbage that will be eaten and enjoyed, it needs to be infused with bacon.

I also used butter to sauté the onions at the beginning of the cooking process, but If you want to make Rotkohl vegan, use oil instead of butter and obviously skip the bacon.

What Gives Rotkohl Its Distinctive Sweet and Sour Taste

Braised red cabbage is very popular in Europe – most of the countries have their own variations. I Poland it would be braised with some onions and finished up with a splash of vinegar and most likely it would be thickened up with a flour-based roux. My Mom would always sprinkle some dill on top it too, but not everyone does this. However, the Polish version of red braised cabbage is not sweet at all.

German red cabbage is cooked with an apple and some sugar. Sometimes cherry preserves are added to it too. This gives the cabbage its sweetness. I braised mine with some apple cider in addition to water, which gave this cabbage an additional boost of flavor.

And to amplify the sour flavor, there’s vinegar added to this German cabbage. Some people would add it at the beginning and let all the flavors marry together during the braising process. I used apple cider vinegar and added it at the end of the cooking. You’ll definitely be surprised at how much color a splash of vinegar brings to the otherwise dull red cabbage. 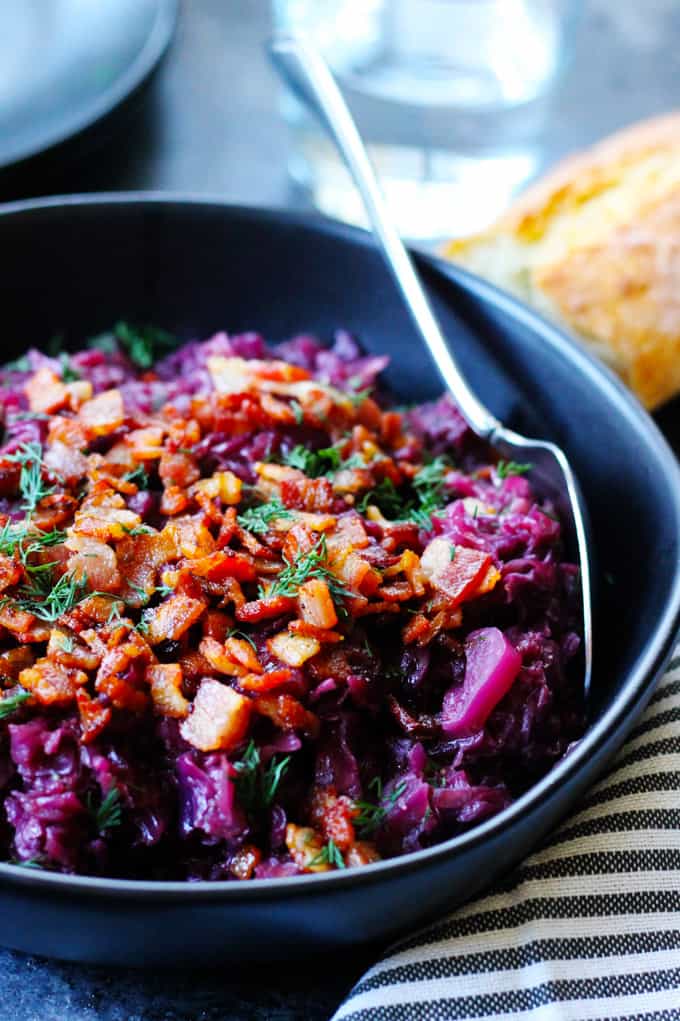 What Ingredients are Needed to Make Braised Cabbage German Style

Here’s a list of ingredients that you’ll need to gather in order to make this awesome braised cabbage. In fact, you may find some of them in your pantry already. All the optional ingredients are fantastic to add but don’t stress it if you don’t have them or don’t want to use them. Your cabbage will be delicious without them too. 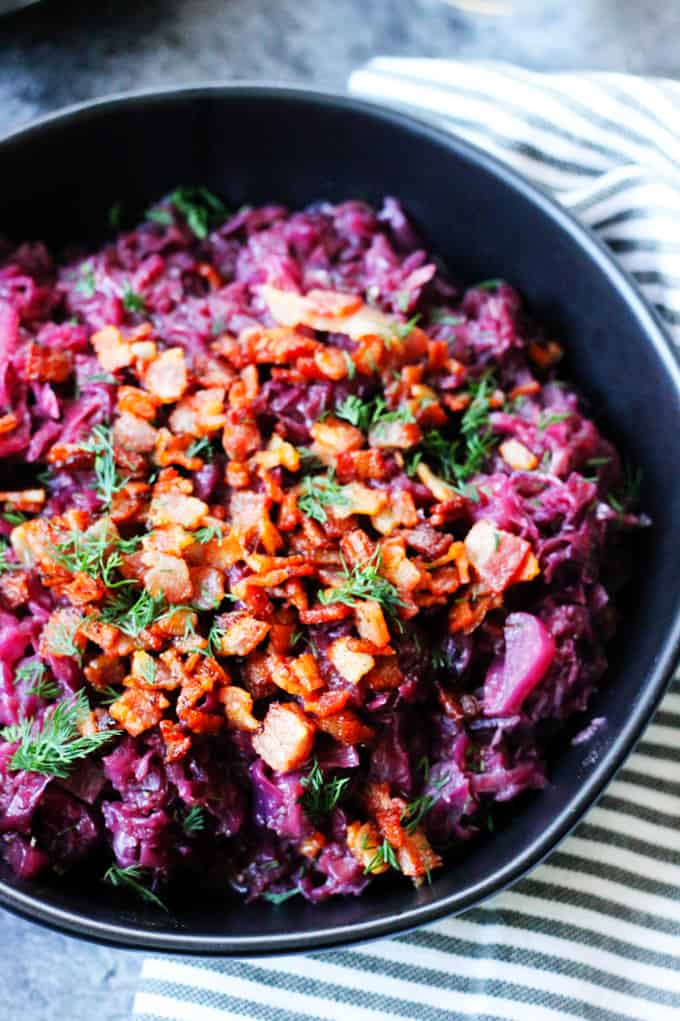 Step 2: Heat up your butter in the braising pot; add onions and sauté for about 5 minutes, until translucent.

Step 4: Braise the cabbage for approximately an hour. Mix it frequently to avoid burning and add more liquid as needed (you can add a little bit more apple cider, but at this stage mostly add water or vegetable stock). Make sure your cabbage is mostly submerged in liquid.

Step 5: Chop bacon and fry up the pieces, until crispy.

Step 6: Add apple cider vinegar to the cabbage; mix well and taste for seasoning. Adjust with salt and pepper as needed.

Step 7: Transfer the cabbage to a serving dish, top with bacon and (optionally) with dill. Serving suggestions can be found below. 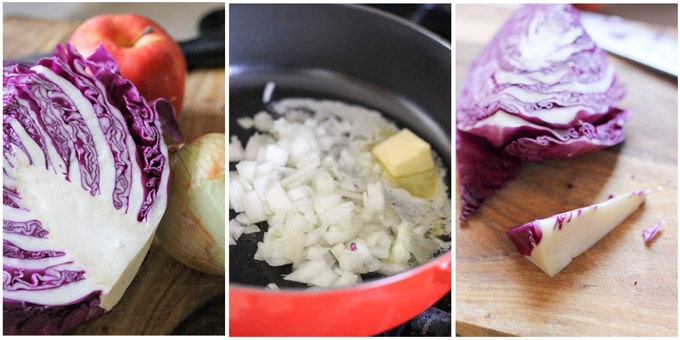 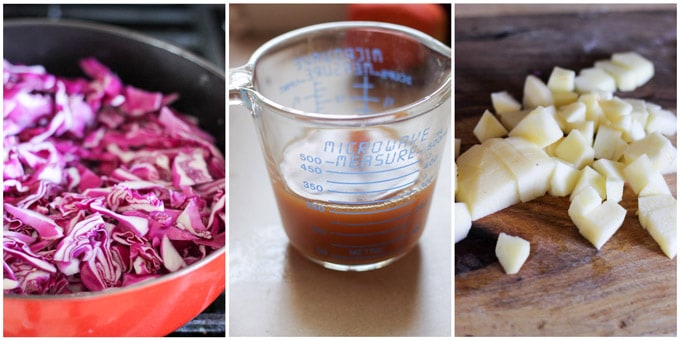 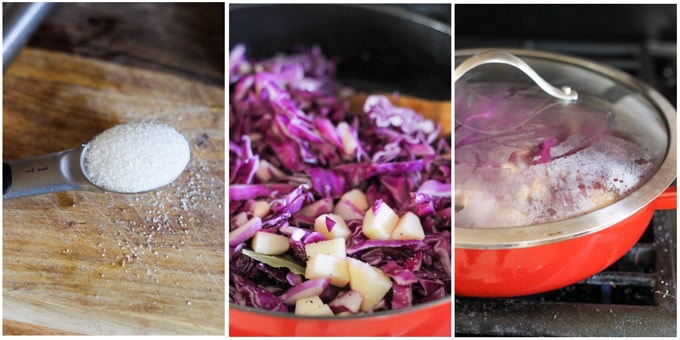 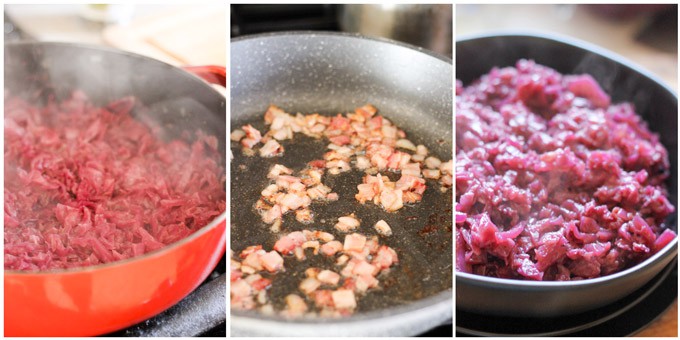 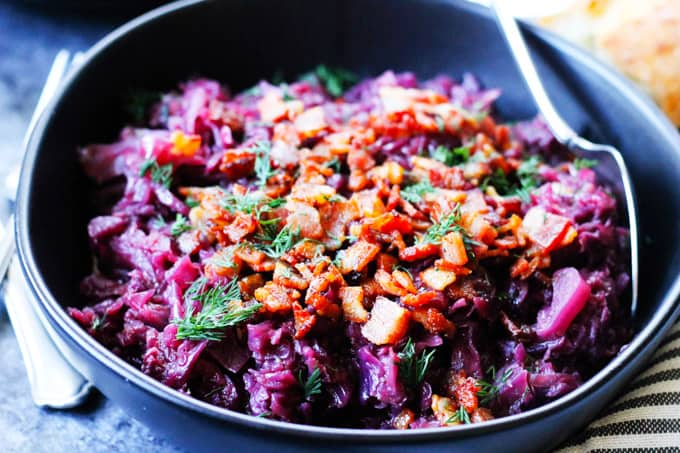 What Do You Serve Rotkohl With

In Germany, this cabbage would be served as a side dish to meats like pork schnitzel, wiener schnitzel, sausages or meats, with sauce like goulash or sauerbraten, and accompanied with a starch, like potatoes, spaetzle, potato dumplings or potato pancakes.

If you’re looking for ideas, here are a couple of my suggestions for meats:

It can also be accompanied by: 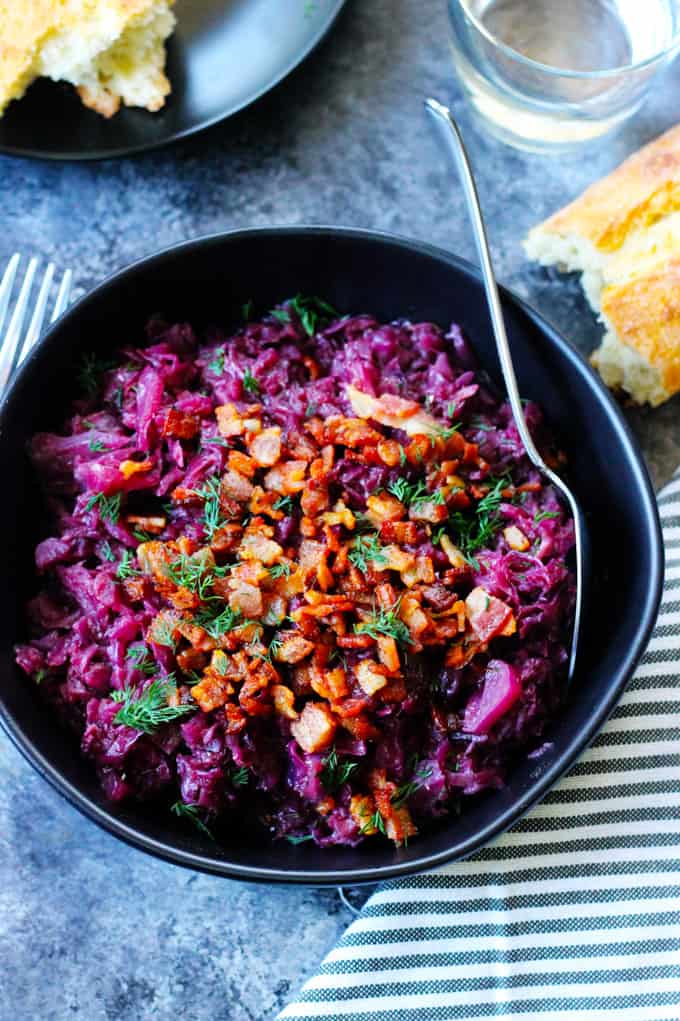 What Equipment Is Needed to Make Braised Red Cabbage

There’s not a lot of equipment needed to make this cabbage. I suspect you probably already have most of it at home. The most important piece of equipment is a braising pot or Dutch oven with a lid that will be able to fit in your cabbage.

You will also need a cutting board and a set of knives to cut up your onions, apple, and cabbage. You may want to use Mandolin to shred the cabbage, but it isn’t necessary. I usually just use a knife. A wooden spoon will also be a good idea to have in order to stir the cabbage once in a while, and it ensures that you won’t scratch the surface of your pot.

If you want to add bacon at the end, you’ll need a frying pan to crisp up the bacon bits. 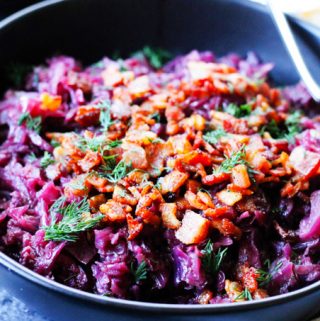 Rotkohl is a classic German side dish for braised red cabbage. It may be served with or without bacon and it has a very distinct sweet and sour cabbage flavor. It's braised in apple cider with a touch of sugar (sometimes with the addition of cherry preserve) and spices then finished off with an apple cider vinegar.
5 from 2 votes
Print Pin Rate
Course: Side Dish
Cuisine: European, German
Servings: 4
Calories: 263kcal
Author: Edyta