Mahon-Menorca Pinwheels with Fig Jam & Serrano Ham will be the appetizer that your whole family is clamoring for on Thanksgiving. Packed with flavor and quick to make – this appetizer is a winner. 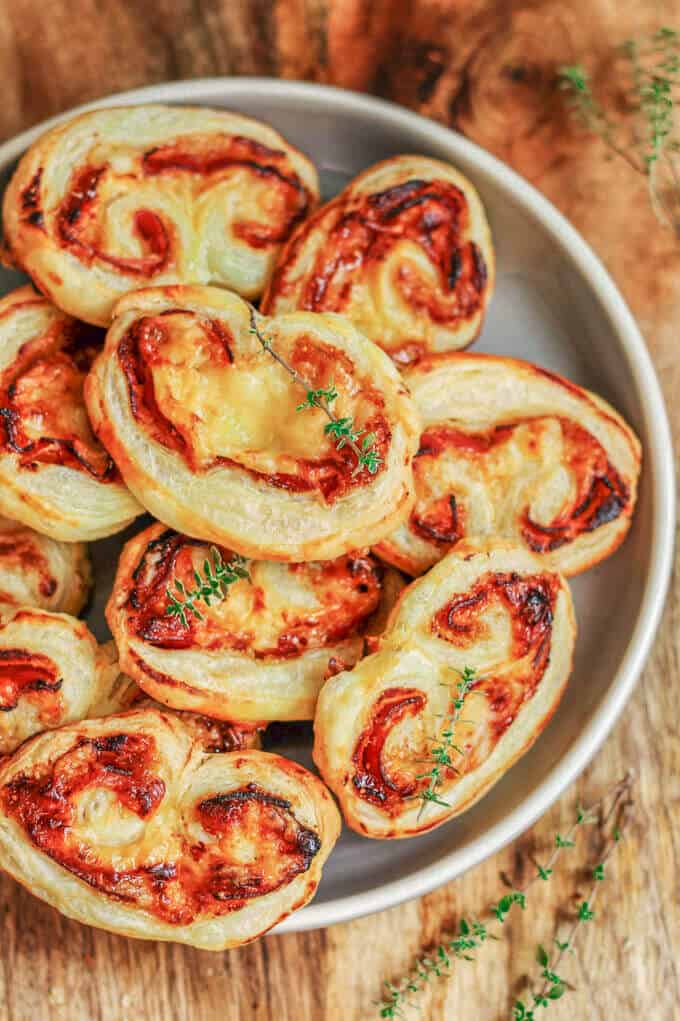 This post for Mahon-Menorca Pinwheels with Fig Jam & Serrano Ham is sponsored by Mahon-Menorca Cheese. Thank you for supporting a brand who helps keep Innocent Delight alive. #MahonCheese

I must admit, that Serrano Ham isn’t very easy to find. It’s usually carried by specialty stores. I have couple of good grocery stores with high-end ingredients that I frequent, and they weren’t caring it. However, for my husband birthday we discovered a new tapas bar near us, so we decided to stop by for a glass of wine. Little did we know, they had an adjacent specialty deli store which was selling Spanish and Italian goods that are otherwise very difficult to find. And guess what, they had my Serrano Ham.

However, if you don’t have any Spanish specialty stores nearby, I suggest substituting with Prosciutto. They’re both cured hams and the tastes aren’t dramatically different. Serrano is a little gamier and less salty but don’t stress about it. Prosciutto will do well in this recipe as well. After all it’s not a featured ingredients of these Pinwheels. Rather Mahon-Menorca Cheese is, and it isn’t difficult to find. There are number of stores which carry it in US, including: 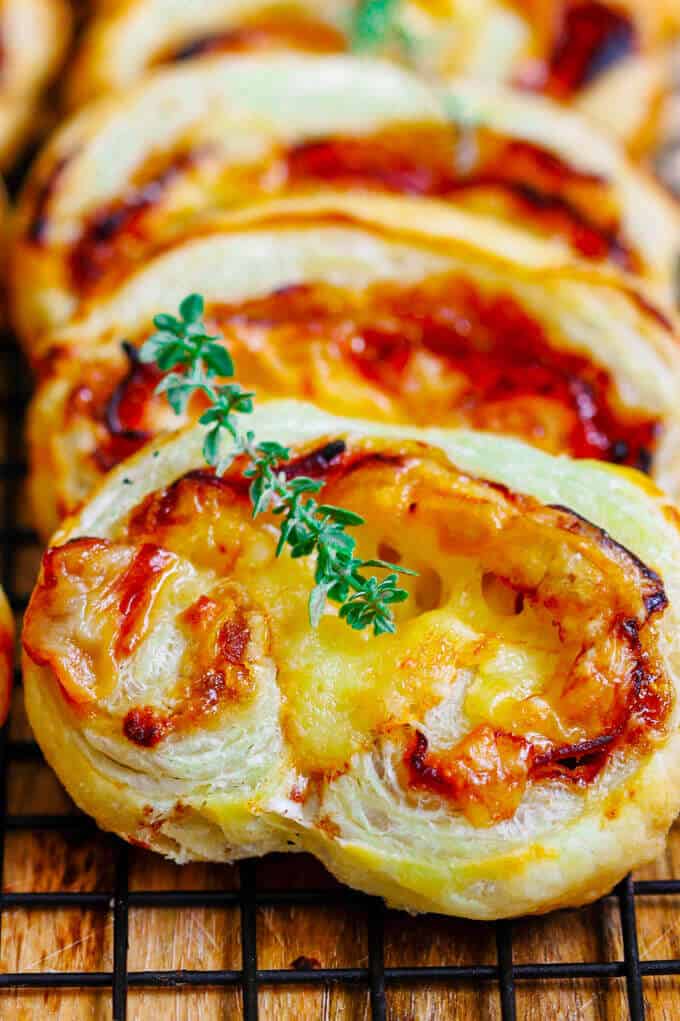 So, let’s talk a little bit about the cheese…

Mahon-Menorca Cheese is a product with a Protected Guarantee of Origin (“P.G.O”). What does that mean? It means that this is a product which is very closely related to the geographic area where it is produced – the island of Menorca. The geographic and climatic factors, as well as process of making and aging the cheese (the process has remained unchanged for a long time in farms and it follows ancient practices), affect he final balance and flavor of the cheese.  On the island the agriculture tradition is carried on by family farms. The landscape is divided by stone walls, to allow the cattle graze freely. All of this has helped for Menorca to be declared a Biosphere Reserve by UNESCO. Isn’t awesome? And you’ll taste it in the cheese!

The history of Mahon-Menorca Cheese is also fascinating. Some of the found pottery remains suggest that the cheese was produced on the island even as early as 3000 BC (talk about long tradition). By the 13th century their foreign trade was already important but it wasn’t until the British rule that the name “Mahon” was first used, which was the name of the product’s shipping port. In 1985 The Guarantee of Origin was conferred, and then in 1997 its protected denomination changed and become “Mahon-Menorca”.

Depending on its degree of maturity, the P.G.O. covers the following types of cheeses:

There is also a new one, a Traditional Style cheese made with Raw Milk that’s aged for 6 months. It is very complex and intense. It can be wonderful if served with fruit or a fruit spread on your Holidays cheese board. 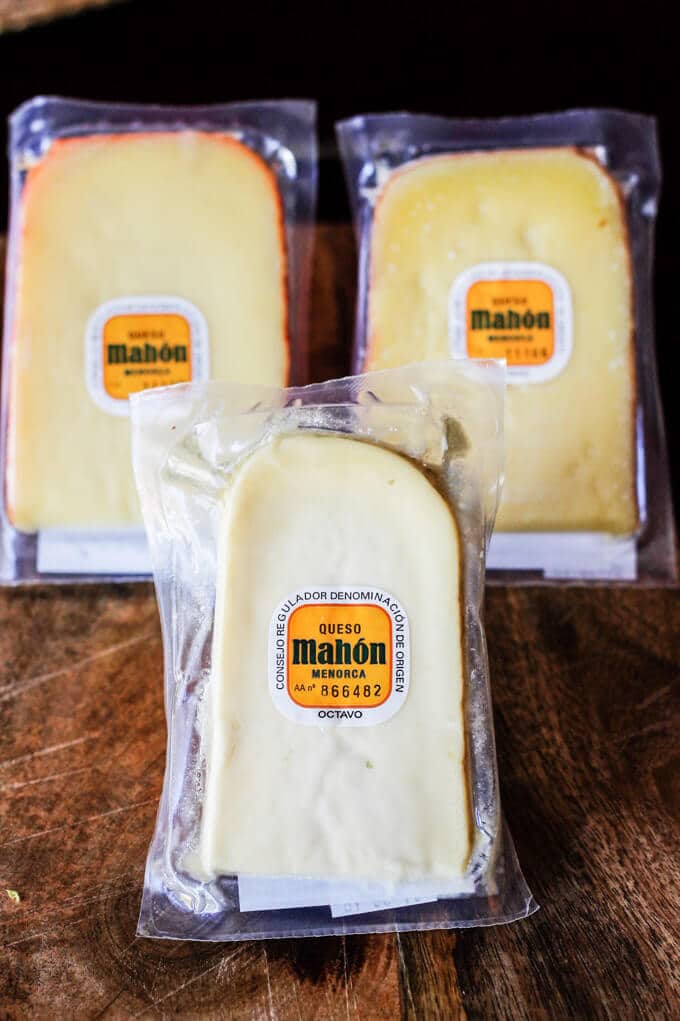 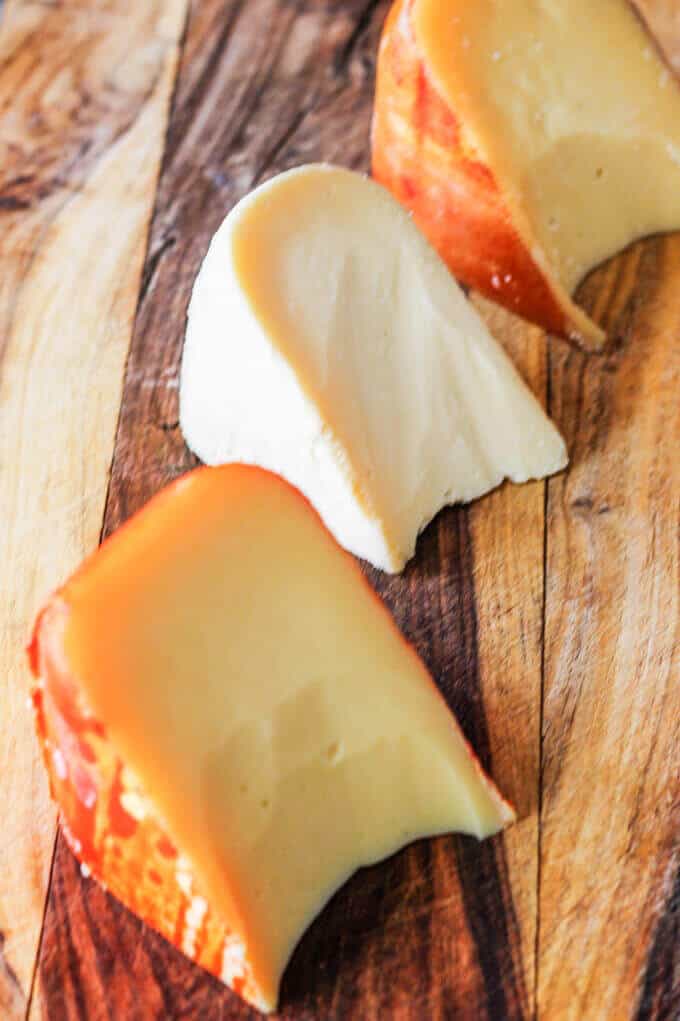 Now coming back to this super easy and super delicious recipe for Mahon-Menorca Pinwheels with Fig Jam & Serrano Ham. Below I put together a little tutorial on how to make them. At the end of this post is also a printable recipe. For this recipe I used the Semi-Cured and Cured cheeses. I sliced the first one and shred the latter. You can actually shred both but I wanted to showcase in the recipe the use of both cheeses. Semi-Cured is hard enough to slice but it’s also soft enough to roll, so it was perfectly fine to just slice it. 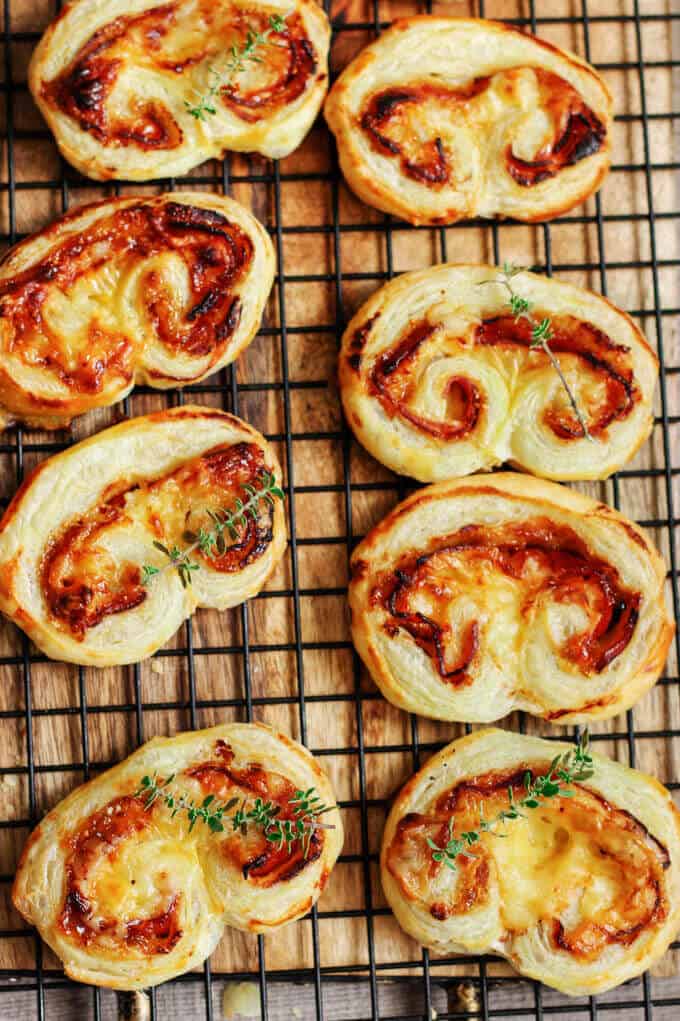 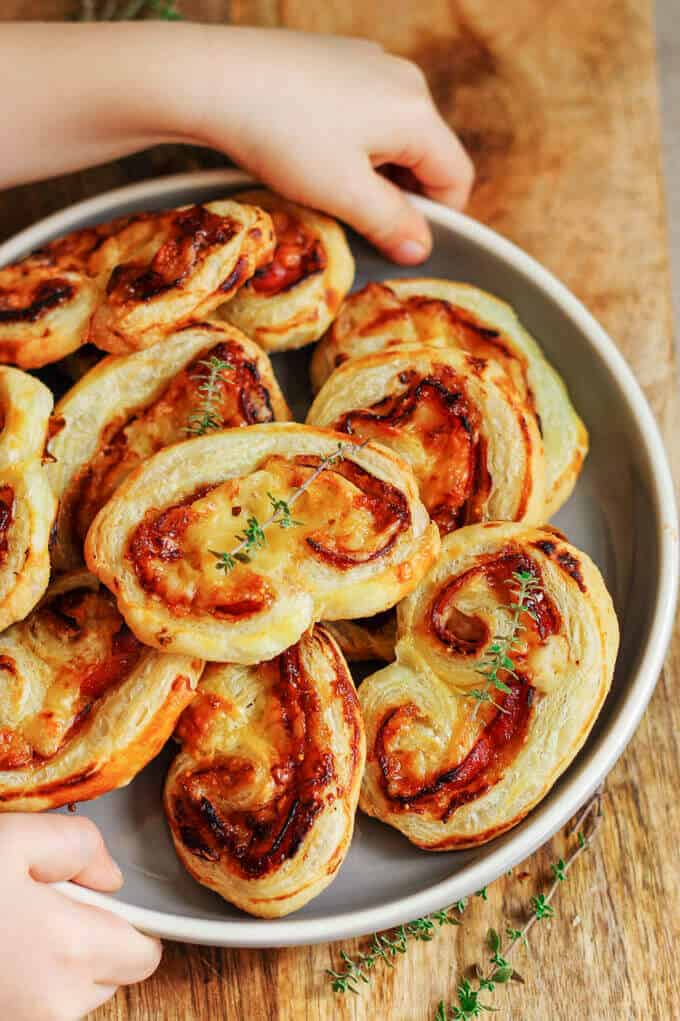 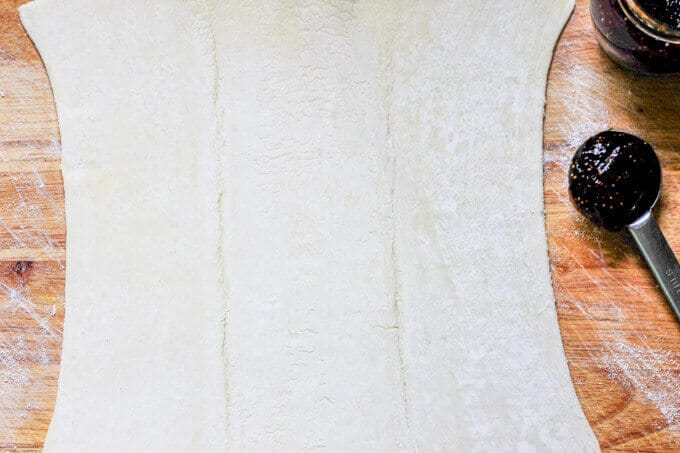 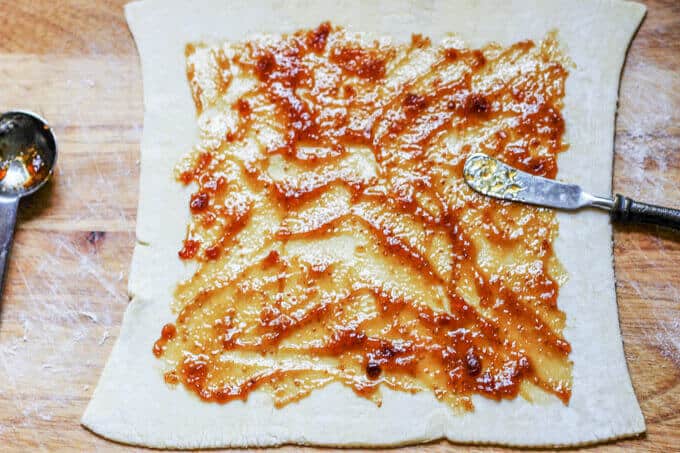 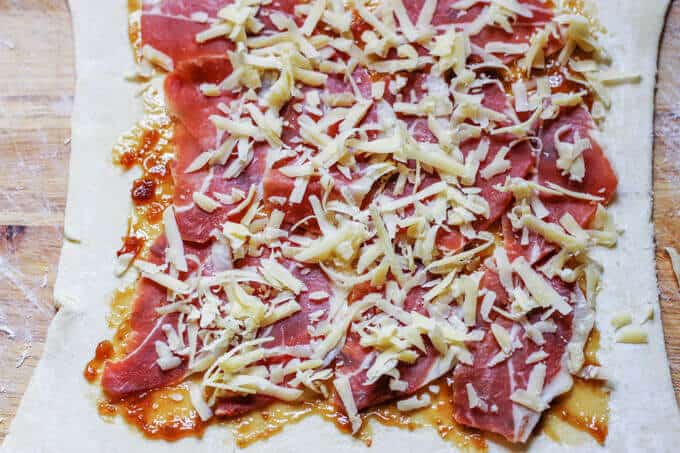 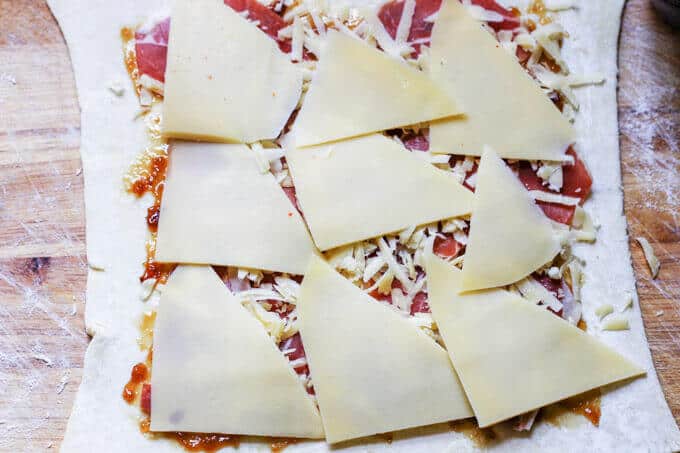 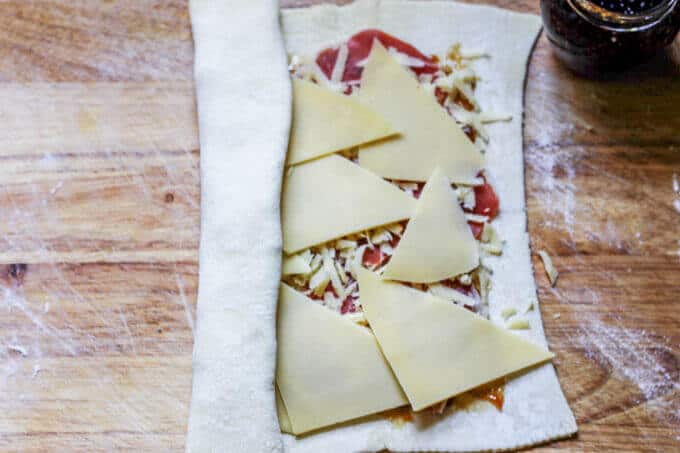 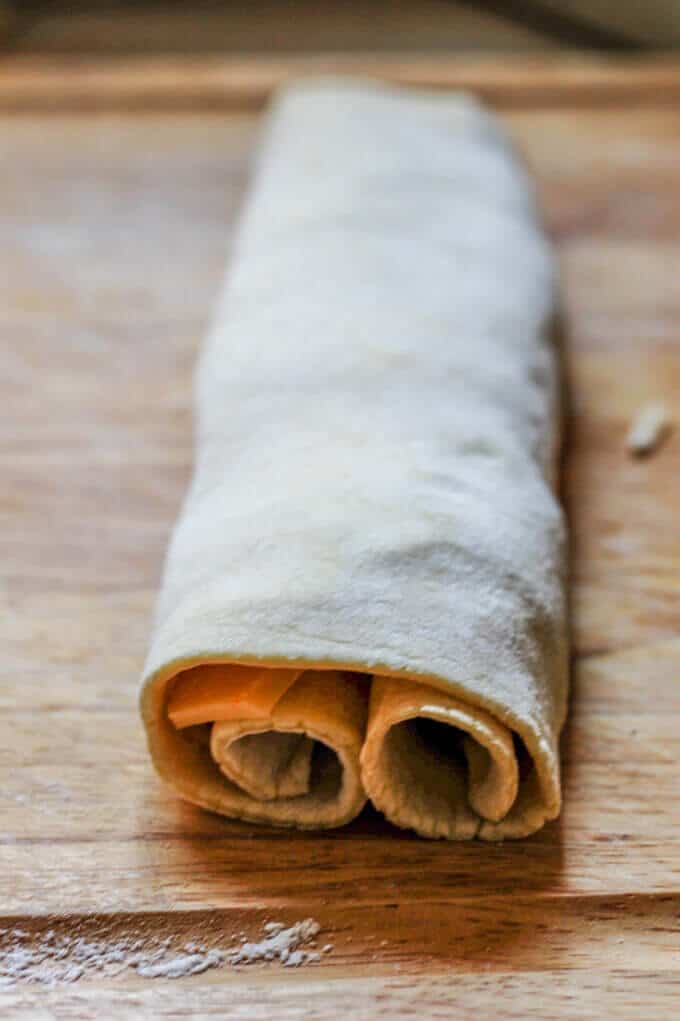 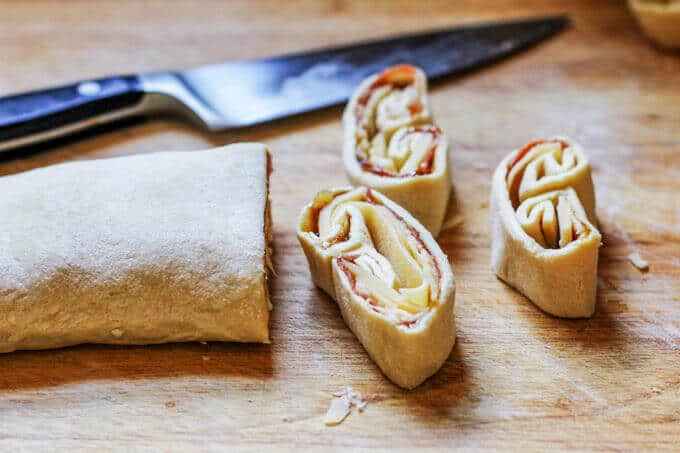 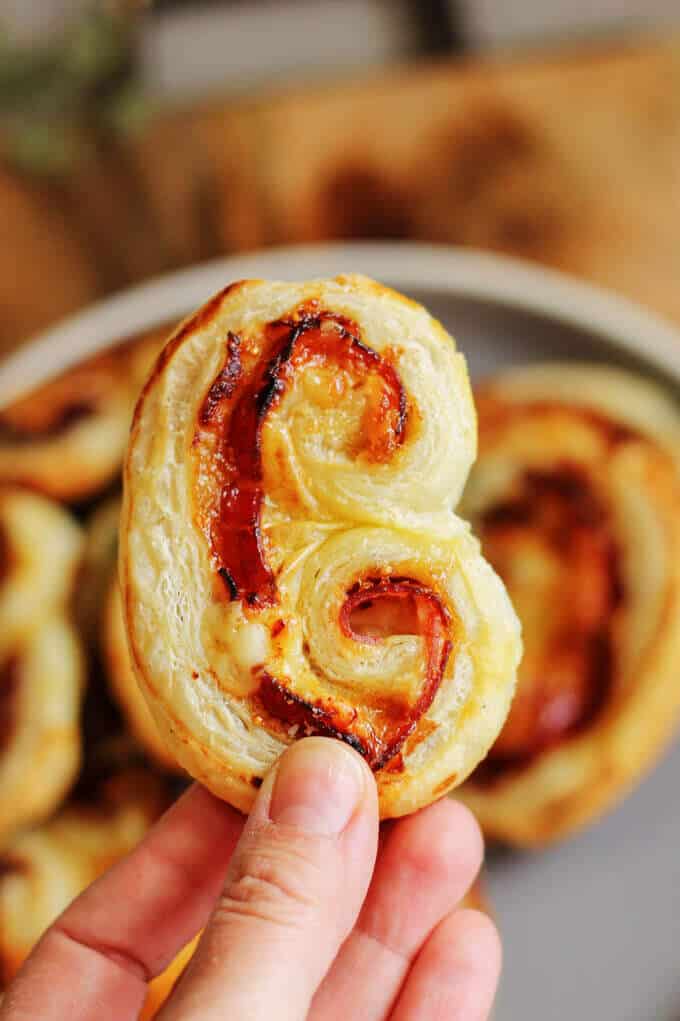 As you can see these Mahon-Menorca Pinwheels with Fig Jam & Serrano Ham are very easy to make and are perfect as a Thanksgiving appetizer. You can actually make them while your turkey is in the oven and serve hot when your guests arrive. But you can also make them ahead of time and simply reheat for a few minutes until warm and they’ll be as delicious as firstly made.

I am super excited that I have more Mahon-Menorca cheese in my fridge because for sure these Pinwheels are going to be present on my Thanksgiving appetizers menu. Don’t wait. Grab your cheese at one of the stores listed above and “WOW” your guests with this sophisticated but super simple-to-make appetizer. 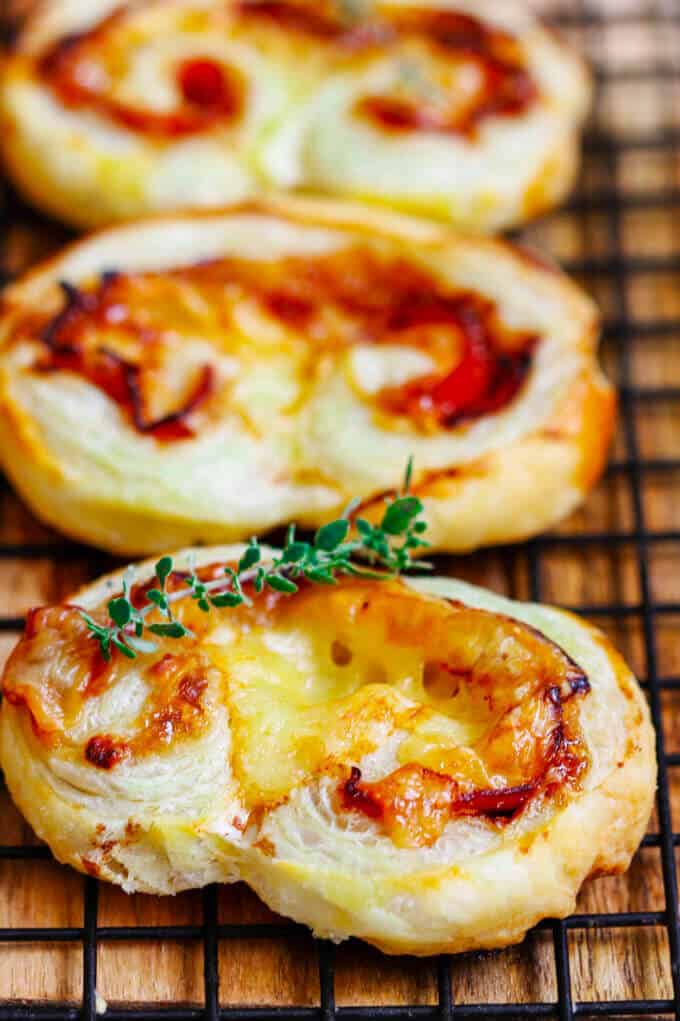 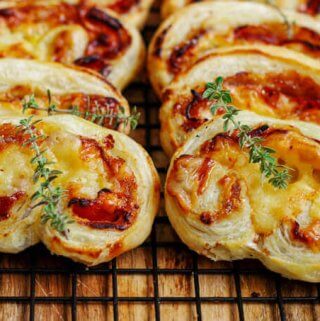 Mahon-Menorca Pinwheels with Fig Jam & Serrano Ham will be the appetizer that your whole family is clamoring for on Thanksgiving. Packed with flavor and quick to make - this appetizer is a winner.
5 from 8 votes
Print Pin Rate
Course: Appetiser
Cuisine: Spanish
Prep Time: 45 minutes
Cook Time: 15 minutes
Total Time: 1 hour
Servings: 12
Calories: 301kcal 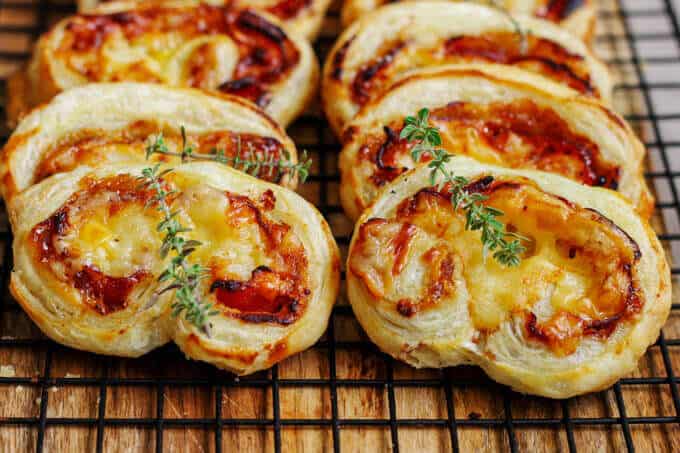