Pan-Seared Ribeye with Cracked Pepper & Mahon-Menorca Cheese Sauce is a super easy and quick idea for any Holiday dinner. It just takes 15 minutes, from start to finish. You can’t beat that! 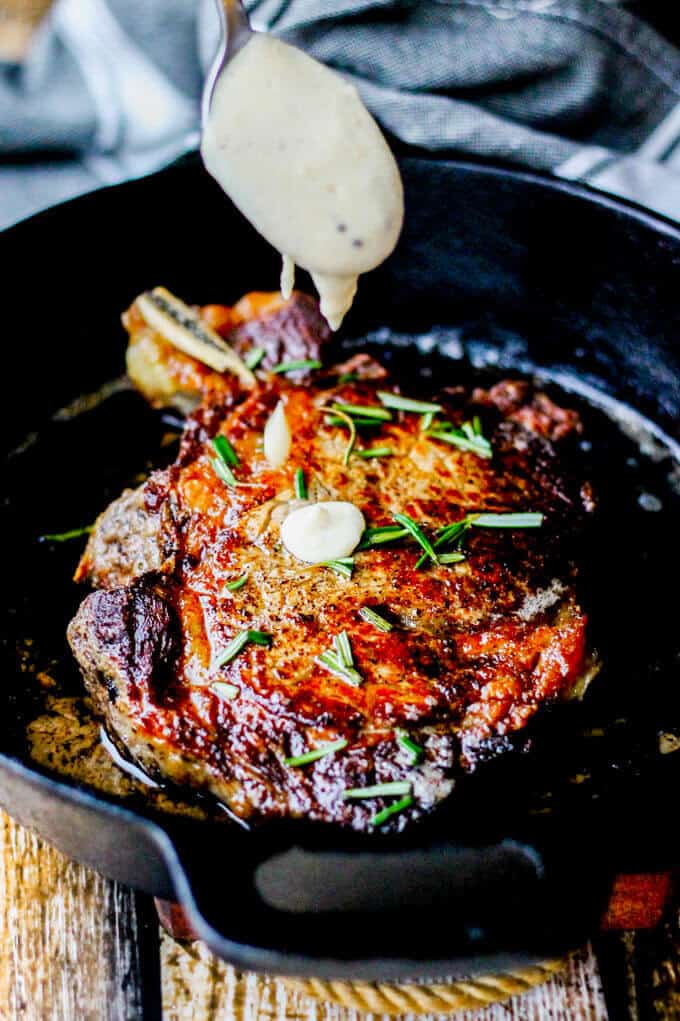 It seems that when it comes to Holidays the natural inclination is to put a fancy type of meat on the table like: leg of lamb, rack of lamb chops, glazed ham or prime rib. Not to disparage these options, but what if you’re cooking for a smaller crowd? In that case, I say go get yourself the best cut of steak out there and make this Pan-Seared Ribeye with Cracked Pepper & Mahon Menorca Cheese Sauce. In fact, even if you’re cooking for a larger crowd you could grab a big piece of meat, like prime rib, and use my Cracked Pepper & Mahon-Menorca Cheese Sauce to serve it with. It’s outstanding!

I chose Ribeye for this recipe, in that we’re just doing a quiet Holiday at home this year, and therefore I don’t have a ton of ravenous appetites to feed. This cut of meat is fattier then other cuts, making it also very flavorful. 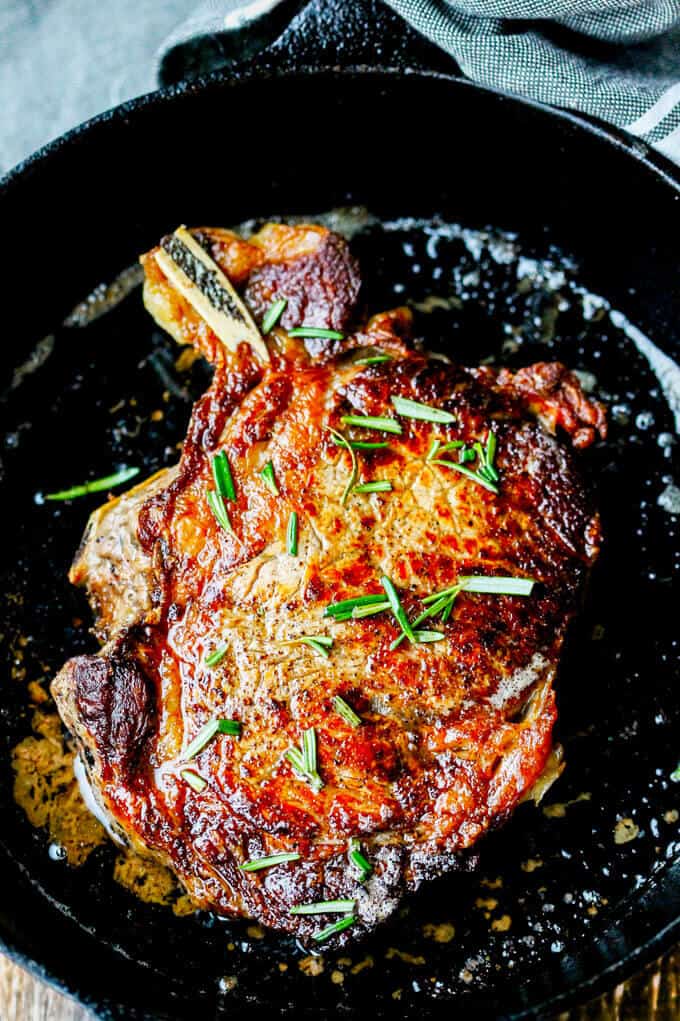 Our two little boys are going to be with us, but if you follow my blog you already know that one is a picky eater, and will not touch a steak, and the other just isn’t big enough yet to eat a steak. But my husband, on the other hand, is a HUGE steak lover. If he could, I’d imagine that he’d devour it all the time. But he does watch his diet, so even if he wanted it all the time he does moderate.

How to Pan-Seared Ribeye

I think that the best way to make a steak is to pan-seared it on a cast iron pan as this provides stable heat, and then finish it off in the oven with, an indirect heat.

My husband likes it more on the rare to medium-rare side. So for a 1 lbs steak, I seared it for 2 minutes on each side to achieve a beautiful crust, and then transferred it into preheated to 415F oven for 4 minutes. If you desire it to be more on the medium rare side, then keep it in there for 5 minutes. For a medium cook you should keep it in the oven for 6 minutes. But always keep in mind that a steak needs to rest for about 10 minutes before cutting it to keep all the juices inside. And while its resting it actually continues to cook. When removing from the oven the internal steak temperature should be: 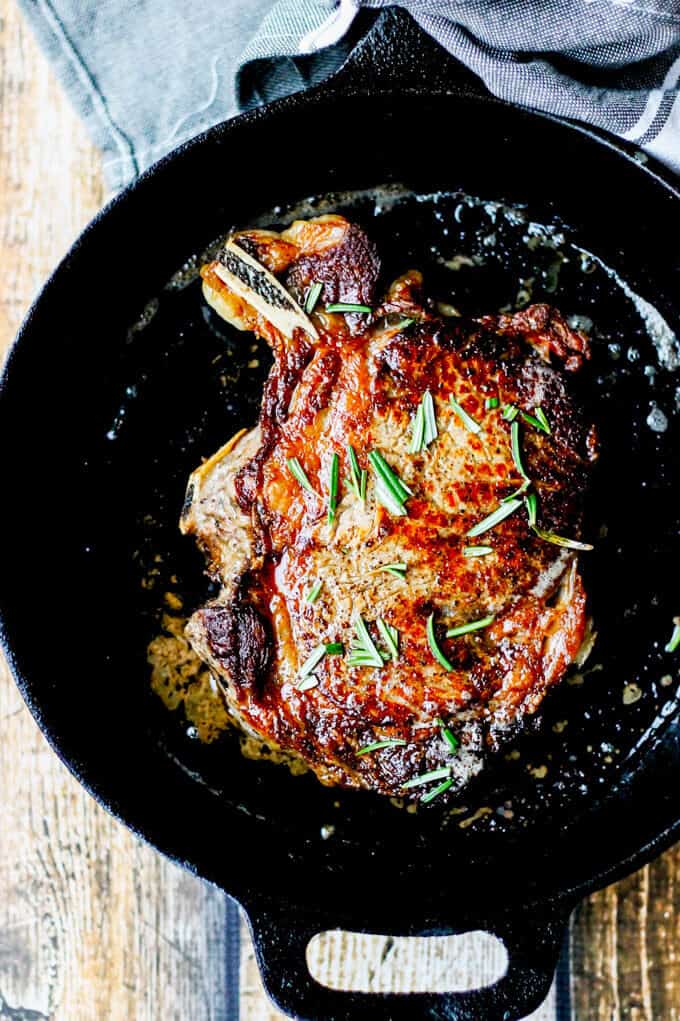 We celebrate Christmas, so for us this is a perfect day to indulge and have some amazing, juicy steak for dinner. But while this Pan-Seared Ribeye can be delicious on its own, it’s the sauce which really takes it to the next level. And if you make it while your steak is in the oven and resting afterwards, then the whole process will take no more than 15 minutes! A win win in my book!!!

Cracked Pepper & Mahon-Menorca Cheese Sauce is very easy to make and it is based on a simple béchamel sauce. You will need:

First you’ll need to melt 1 tablespoon of butter, then add 1 tablespoon of flour, mix it well and gradually add 1 cup of milk. Once the sauce begins to thicken up, then you will add lots of cracked black pepper, turn off the heat and add your 1 cup shredded Raw Mahon-Menorca Cheese. Pour it over steak and voila! You have perfect Holiday dinner. 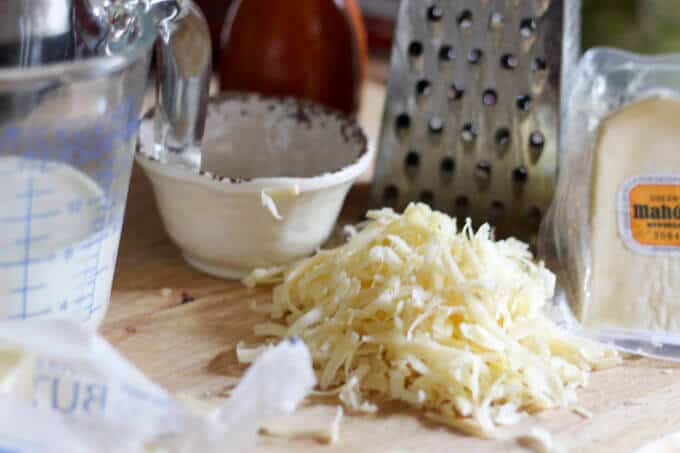 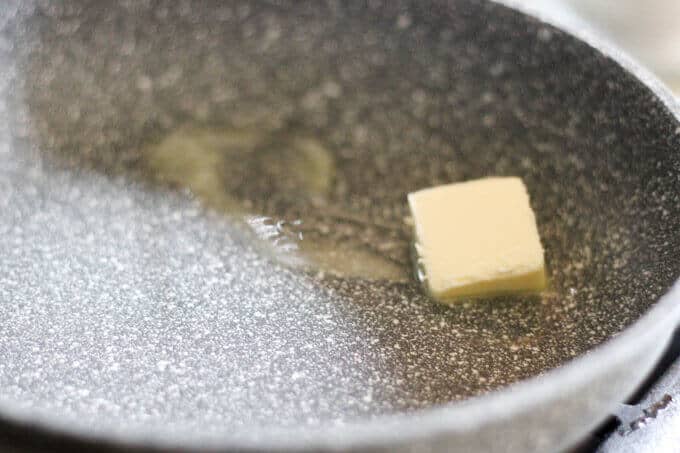 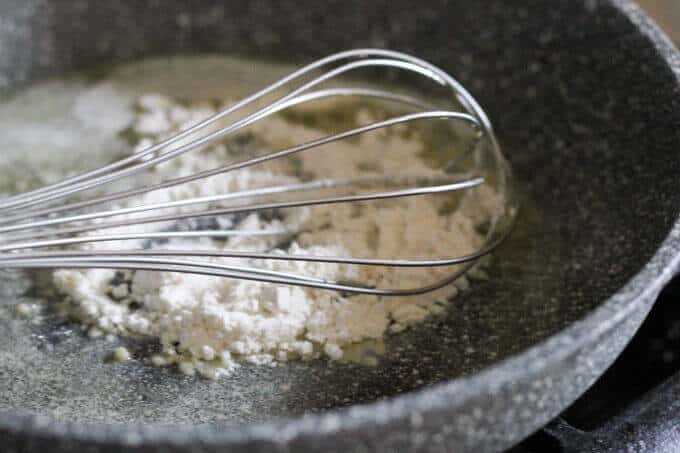 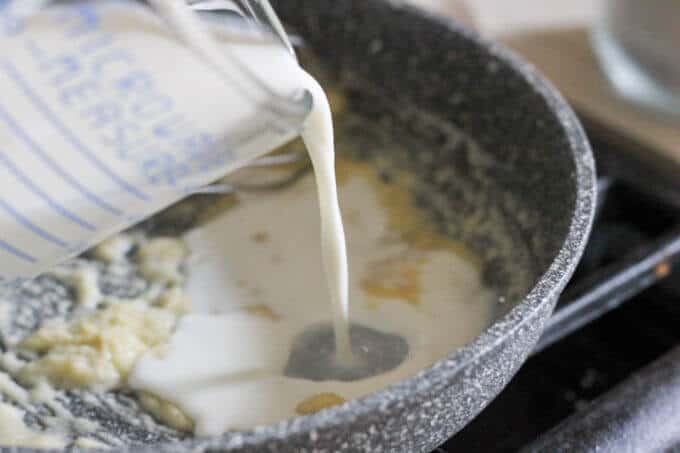 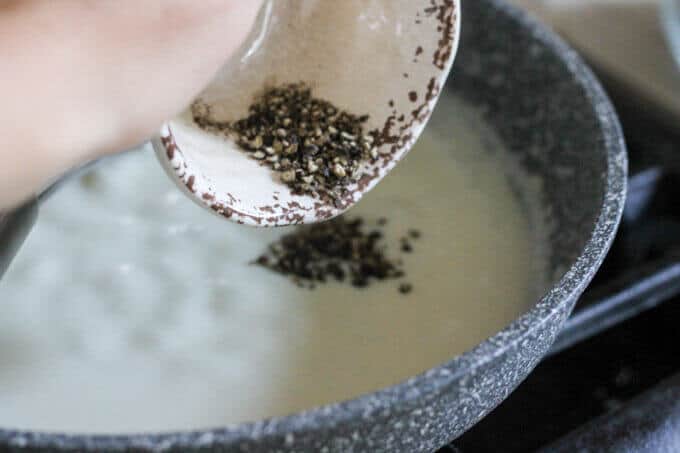 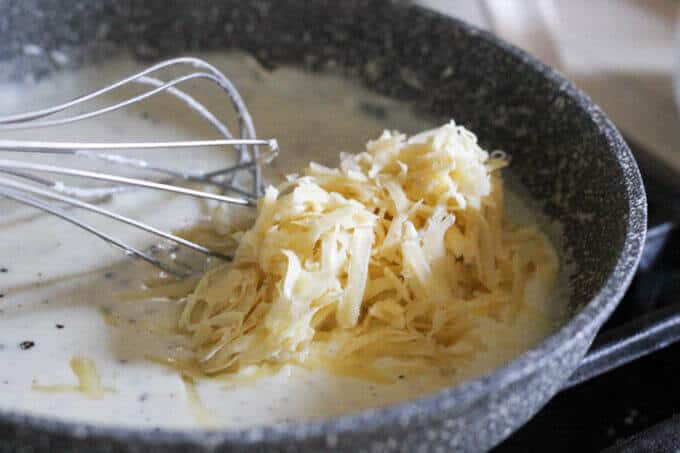 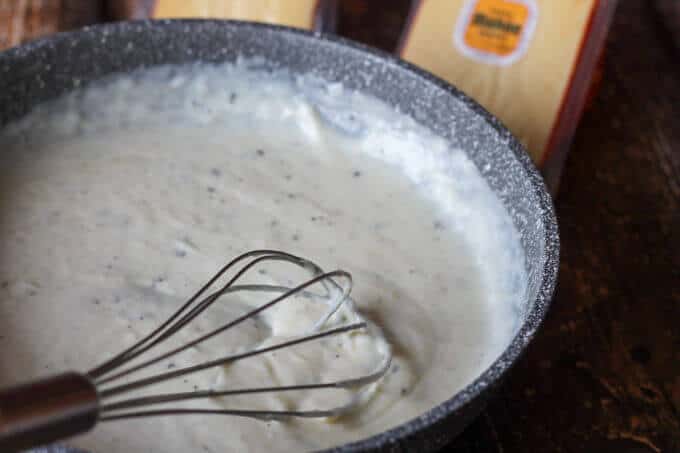 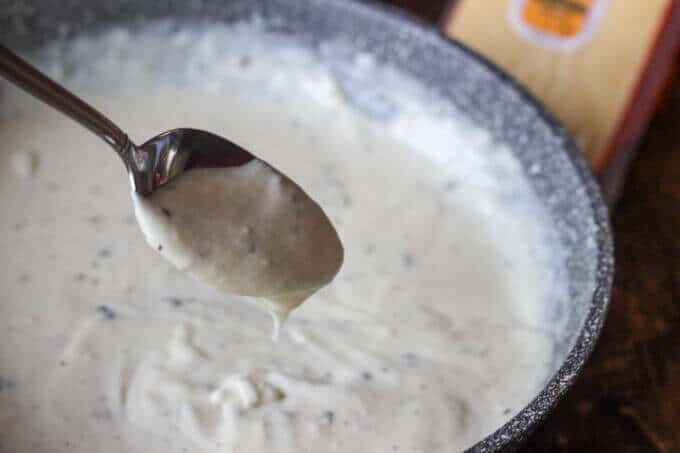 I wrote about these Mahon-Menorca Cheeses in this post for Mahon-Menorca Pinwheels with Fig Jam and Serrano Ham that are perfect for the Holidays’ appetizer round. But if you missed it, here is some interesting information… 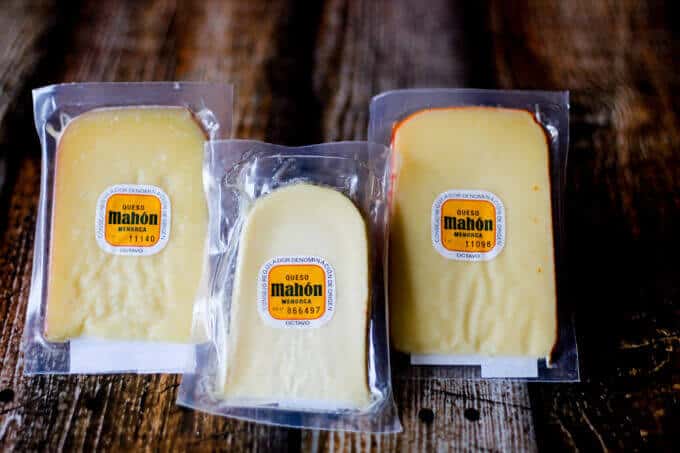 Mahon-Menorca Cheese is a product with a Protected Guarantee of Origin (“P.G.O”). It means that this is a product which is very closely related to the geographic area where it is produced – the island of Menorca. The geographic and climatic factors, as well as process of making and aging the cheese (a process that has remained unchanged for a long time in farms and which follows ancient practices used), affect he final balance and flavor of the cheese.

Some of the found pottery remains suggest that the cheese was first produced on the island even as early as 3000 BC. By the 13th century their foreign trade was already important but it wasn’t until the British rule that the name “Mahon” was first coined – which was the name of the product’s shipping port. In 1985 The Guarantee of Origin was conferred, and then in 1997 its protected denomination changed and become “Mahon-Menorca”.

Depending on its degree of maturity, the P.G.O. covers the following types of cheeses:

There is also a new one, a Traditional Style cheese made with Raw Milk that’s aged for 6 months. It’s also very complex and intense. This is the cheese that I used here for my Cracked Pepper and Mahon-Menorca Cheese sauce because of its incredible flavor.

Where to find Mahon-Menroca Cheese

As mentioned in my previous post, all these cheeses can be easily found throughout the US. Some stores which carry it include:

Alright, I know what we’ll be having for our Christmas dinner. If you are looking for some inspiration, then I hope you will give this recipe for Pan-Seared Ribeye with Cracked Pepper and Mahon-Menorca Cheese Sauce a try. Happy Holidays! 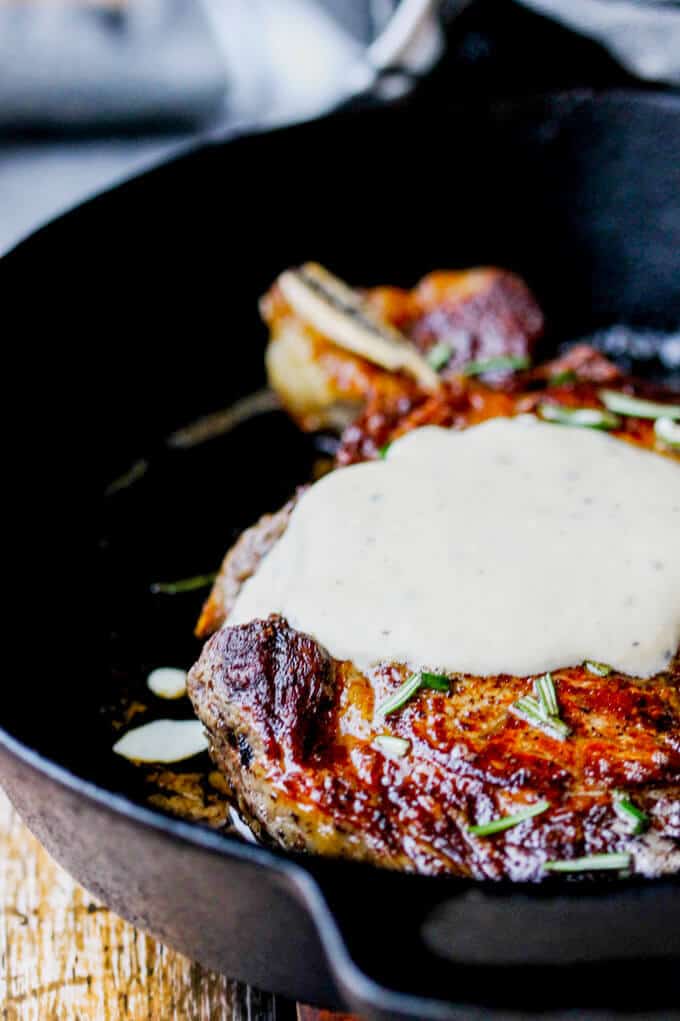 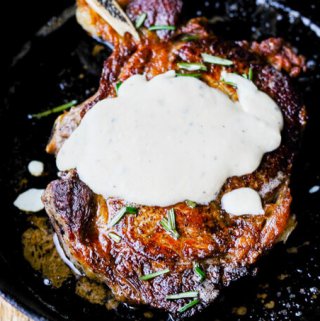 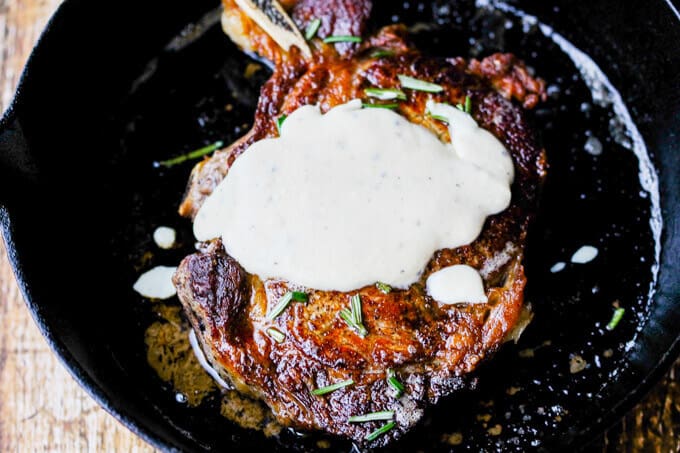